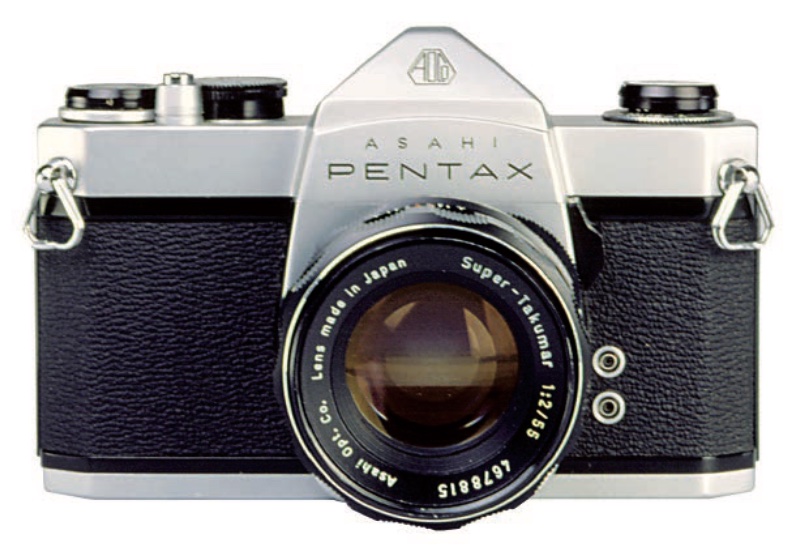 If you've got an eye for great results, but your budget is a bit on the slim side, then this is a camera you should consider.

It has classic Pentax craftsmanship and design, plus most of the features of the Spotmatic II - at a lower price.

This is the Pentax SP 500 - another proud member of the world-famous Pentax family whose name has become synonymous with design innovations and precision craftsmanship in 35mm single-lens-reflex cameras.

When the first Pentax Spotmatic was introduced to the public at the 1960 PHOTOKINA, the world's largest photographic fair, in Cologne, Germany, it attracted the instant and close attention of photographers and photographic engineers alike. Not available for purchase at that time, it was a model of the advanced design and features that would be incorporated into cameras of the future. Pentax cameras and other brands as well.

Several years of extensive research preceded its introduction, and four more years of research and experimentation followed before the meticulous Pentax engineers and technicians felt the camera was truly ready. At last, in late 1964, it reached the eager hands of serious amateur and professional photographers around the world. Like that early Spotmatic, Asahi Pentax SP 500 is a computer camera. Hidden within its body, its unique, behind-the-lens exposure meter utilizes two highly sensitive Cadmium Sulphide sensors to accurately measure the light gathered by the camera's lens as it is reflected from the subject being photographed. Therefore, by measuring the light as it passes through the lens and matching the exposure needle as seen through the viewfinder, you can be assured of properly exposed pictures under all but the most impossible lighting conditions. Whether you're using special, macro- or microphotographic lenses, telephoto lenses, or simply filters on normal lenses, Asahi Pentax SP 500 will give you correctly exposed photographs without the use of external meters or the need for difficult, time-consuming exposure calculations!

SP 500 may also be set manually the same as any other quality 35mm camera if special lighting or selective focus effects are desired. Just leave the exposure meter switch in its OFF position and select the f/stop and speed settings for the desired effect.

The traditional classic design and simple elegance associated with earlier models of the famous Pentax have been retained in the SP 500 despite the incorporation of many highly advanced features and many internal improvements that have been developed over the years.

Like the other members of the Pentax family, the Asahi Pentax SP 500 has a 42mm threaded lens mount that accepts any of the superb Takumar lenses from the ultra-wide-angle 17mm Takumar to the super-telephoto 1000mm Takumar, a wide range of optics that will satisfy the demands of even the most critical professional.

Moreover, the list of fine accessories is always growing - to help you keep growing photographically.

'COCKED' INDICATOR: A red disc appears in a small window alongside the shutter release button when the shutter is cocked, and blacks out when it is released.