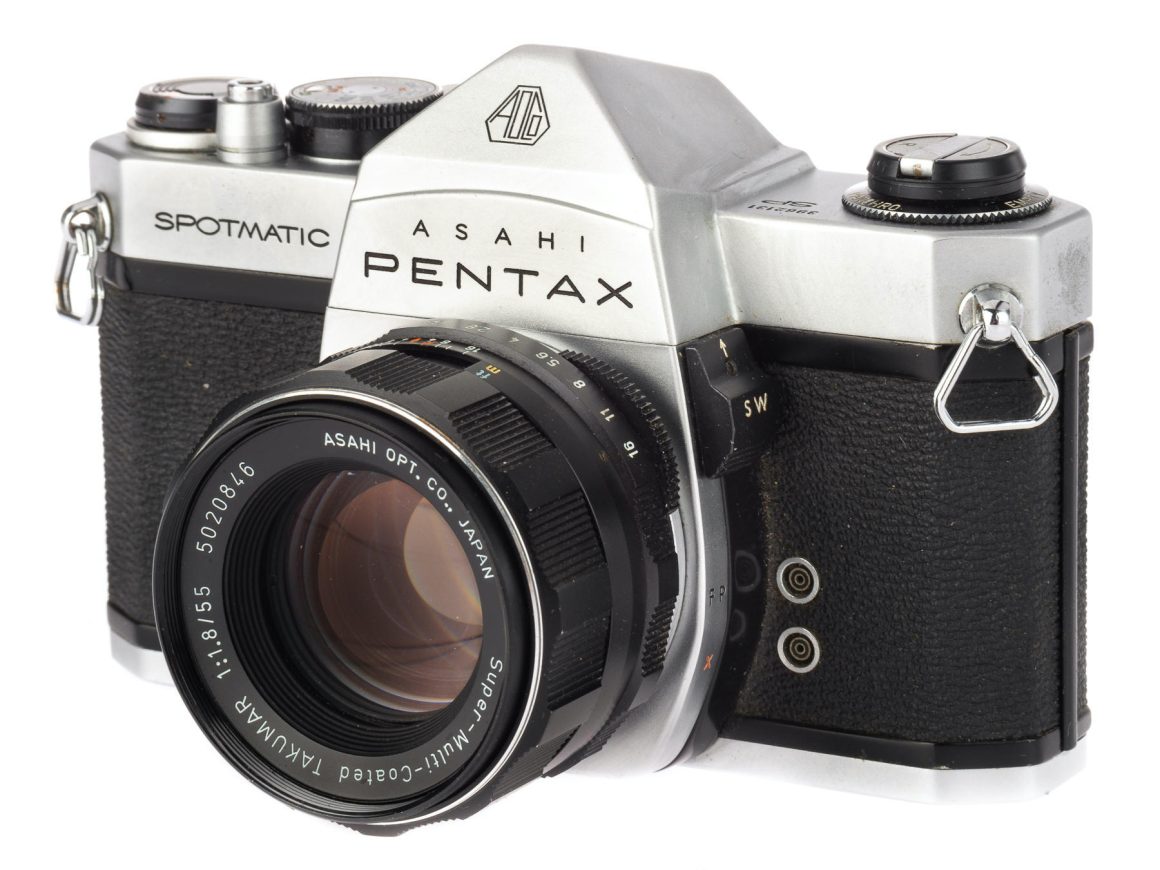 There are many reasons why this has become the world's best-selling camera of its kind. The Honeywell Pentax Spotmatic combines the classic Pentax design, compact size with an uncannily accurate through-the-Iens fuII format metering system. It reads the in-focus image on the ground glass made by light passing through the taking aperture of the lens - exactly the same light the film sees. Regardless of the lens focal length, you're assured properly exposed pictures. You can forget about bracketing"insurance" shots and concentrate on the creative aspects.

Other features that assure you professional quality pictures with the Spotmatic include its bright, clear eye-level viewing system which makes composing and focusing easy even in dim light. And its convenience features such as built-in self-timer, automatic exposure counter reset and depth-of-field preview give you complete control over any picture situation.

See and hold the Spotmatic. Compare its "feel" to other expensive cameras. We think you'll agree it is in a class by itself.

When the Asahi Pentax Spotmatic was introduced to the public at the 1960 Photokina, the photographic world's fair in Cologne, Germany, it attracted immediate and keen attention. Not available for purchase at that time, it was a model of the advanced features and design that would be incorporated into cameras of the future.

Four years of extensive research, exhaustive experiments and intensive testing followed before it became available to serious amateur and professional photographers in late 1964.

With its unique behind-the-lens exposure meter of entirely new design, the Asahi Pentax Spotmatic is now more than just another camera... it is a new concept in photography.

Hidden within the camera body, its through-the-lens meter utilizes two highly sensitive Cadmium Sulphide sensors to accurately measure light seen by the camera's lens as it is reflected from the subject being photographed. Therefore, by measuring the light as it passes through the lens and matching the exposure needle as seen through the viewfinder, you can be assured of properly exposed pictures under all but the most impossible lighting conditions. Macro- or microphotography, pictures with telephoto lenses or with filters... the Asahi Pentax Spotmatic will give you correctly exposed photographs without the use of external meters or the need for cumbersome, time-consuming calculations!

The Spotmatic may also be set manually the same as any other quality 35mm camera if special lighting or selective focus effects are desired. Just leave the exposure meter switch in its OFF position and select the f/stop and speed settings for the required effect.

The traditional classic design and simple elegance associated with earlier models of the famous Asahi Pentax have been retained in the Spotmatic despite the incorporation of many highly advanced features. Meticulously constructed by master craftsmen, the Asahi Pentax cameras remain the standard of excellence and precision in the world of 35mm single-lens-reflex cameras.

"COCKED" INDICATOR: A red disc appears in a small window alongside the shutter speed dial when the shutter is cocked, and blacks out when it is released.