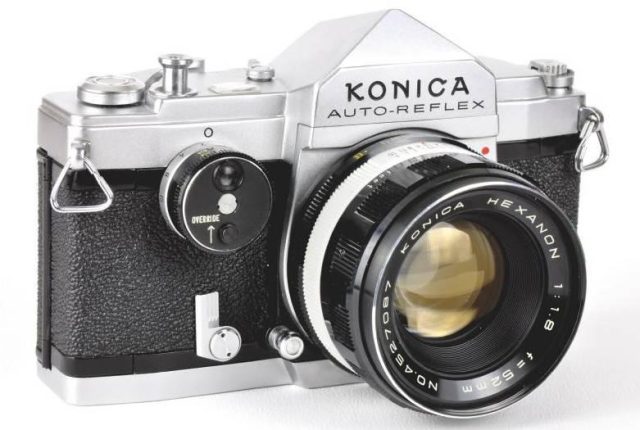 When Konica innovated the 35mm rangefinder camera with total exposure automation, that is, a camera that set the f/stop and let the photographer concentrate solely on picture-taking, we were asked why this great advantage wasn't possible for the professional photographer who used an SLR. So we did something about that, and invented the first professional SLR with exposure automation, the Konica Auto-Reflex. And while we were at it, we gave the SLR user total control of his camera. Automation without control is pretty useless to the pro. Yet that's all the other SLRs offer!

All high-quality SLRs tell you that they offer you "control", by letting you turn an aperture ring until a needle in the viewfinder lines up with another needle or mark. Then you have the correct exposure. But what is it? Is your subject still around after you twist the ring? Do you know the f/stop you are setting? Are you willing to set a blind exposure, not knowing whether you want to over-ride the automation or not? Are you certain the camera is correctly operating? Do you have f/stop information to tell you whether you have enough or too much depth-of-field? Is that control?

Not so with Konica Auto-Reflex, or its behind-the-lens metering mate, Konica Autoreflex-T. The unique viewfinder of this new-generation camera tells all. It tells you the f/stop being set by the electric eye; the maximum aperture of the interchangeable lens you are using: whether you are shooting in auto or manual mode; and of course whether you are in perfect focus. That's "control" because you can decide whether you want to change lens, f/stop or mode of operation, without removing the camera from your eye.

If it's true control you seek, plus automation, with a full system of Automatic Hexanon lenses and accessories, you'll look into the Konica Auto-Reflex or Autoreflex-T today.

A CAMERA IN YOUR DREAM CAME TRUE!

First In The World - As the only Single Lens Reflex of ELECTRIC EYE system, the KONICA Auto-Reflex is already acclaimed by experts as "the Camera of the Century". With the EE range from EV2 (light of a match) to EV18 (dazzling light of snow scenes), your photographic eye and ability will truly combine with the camera.

First In The World - FULL SIZE - HALF-FRAME. There will be such a time as will make you feel like taking as many pictures as possible on a film throughout or on a certain length of the film. You can switch either to HALF or FULL while shooting without opening the backlid or taking out the film loaded.

You need not take your eye off the Viewfinder while shooting to confirm at what aperture the shutter is actuated. Now no nuisance at all! You can keep going on speedy and accurate picture-taking as a true "shutter-bug".

The Metal Focal Plane Shutter is dynamic, yet silent; fast, yet steady; rigid against extremes of heat and cold: its blade transit speed 3m/sec. Flash synchronization at all shutter speeds from one second to 1/1000 with class M flash bulbs; up to 1/125 at X setting with electronic flash.

The super-sensitive CdS Lightmeter coupled to the EE mechanism can be used for proper exposure determination even in the event of manual operation. Thus you can pursue special exposure effects and fine exposure adjustments.

HEXANON standard lenses and a complete line of HEXANON interchangeable lenses - camera fans know better than we about HEXANON's superiority - including the compact Zoom lens for half-frame filming. Micro diaprisms for extremely bright and clear focusing. Abundant accessories, attachments, auxiliary devices. Into all these and in every part of the KONICA Auto-Reflex, Konica's technology is permeated.

Finder: Pentaprism eye-level viewfinder. Focusing is done with micro diaprisms in the center of viewfinder. Full Size and Half Frame marks and Metering Needle visible in the viewfinder.

The weight and dimensions are indicated for the camera body with the Konica Hexanon 52mm F/1.8 lens mounted.