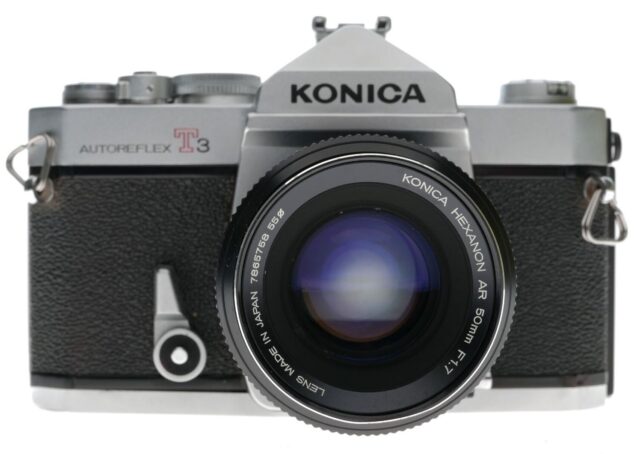 The KONICA Autoreflex-T3 is a fully automatic SLR (TTL-AEC) system in which preference is given to shutter speed. It is also usable in manual shooting.

The KONICA Autoreflex-T3 has a TTL meter of the variable metering type in which the kind of metering that is fitted to the picture coverage angle of a given interchangeable lens is selected. Metering may be done either at the full opening of the taking lens or with the lens stopped down, and this feature is common to all interchangeable lenses.

All kinds of information necessary for picture-taking, such as the shutter speed and aperture value, and the meter needle may be instantly ascertained on the field of view of the finder.

The lens used in your camera is a high-quality and high-performance color-coated Hexanon which displays its full force in color photography.

Your camera makes it possible to ptoduce perfect multiple exposures, and there are no shears in picture area at all.

The shutter is of a metal plane type and excels in winterization. It is synchronized to strobos at shutter speeds of up to 1/125 sec. Both hot shoe clip and M.X synchro sockets are available on your camera.

Each manipulation control is equipped with a safety lock. For example, your camera is provided with a shutter button lock which concurrently serves as the meter switch to prevent erroneous manipulation, an EE release button designed to prevent the EE system from being accidentally put into operation, and a self-timer button.

Synchro-Flash: "X" synchro contact for hot shoe clip. Synchronized with all shutter speeds at M synchrocontact with M, FP and MF classes of bulbs and with electronic flash at X synchro contact at 1/125 sec.

Finder: Pentaprism eye-level finder with magnification at 0.78X (with 50mm lens at infinity) and field of view set at about 92% of the actual field of picture. Equipped with focusing screen of real image-alignment type using standard Micro Dia Prism type (or optional split-image type).

Film Wind: Cocking in single action with top lever (with wind of 162 deg. and play of 30 deg.). Equipped with wind completion indicator and double-exposure prevention device.