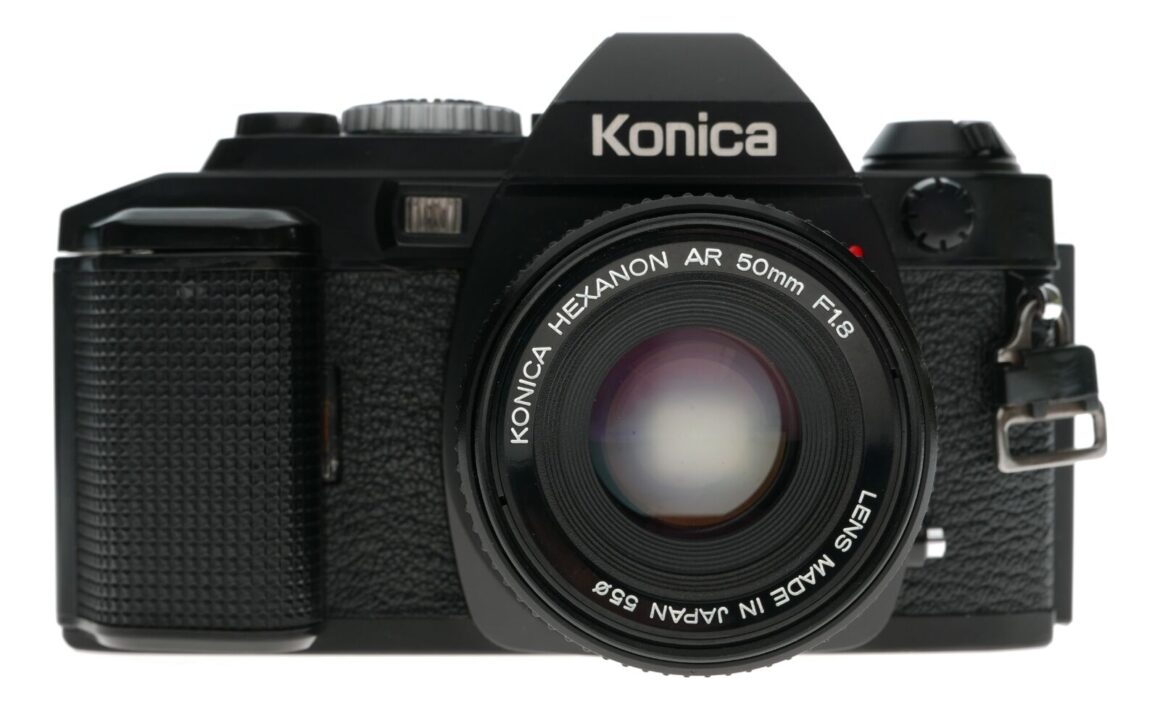 Even if it didn't have a built-in autowinder, it would still be unmatched for value

Never before has there been so much value packed into one 35mm SLR camera.

It's as simple as this: Only the compact Konica FS-1 gives you a built-in autowinder for less money than cameras with expensive, bulky add-on autowinders.

With the FS-1 the autowinder is never left behind, it's always there, always ready. And with the autowinder built-in the FS-1 is lighter and more compact than any add-on winder/camera combination. After each exposure the built-in autowinder automatically advances the film. Just hold down the micro-switch shutter release, and you can fire off a full 36 exposures in a mere 24 seconds with perfect automatic exposure in each frame!

At last, fumble-free loading! Drop in your 35mm cassette, extend the leader, close the back. The FS-1's micro-motor instantly advances the film to frame #1... and you're ready for action. Misloading is near impossible!

It's the only sensible way to be sure you stop the action everytime. You pick the precise shutter speed you want, the Konica FS-1's center weighted GaAsP (Gallium Arsenide Phosphide) photo cell continually and critically monitors the light; and automatically sets the aperture (LED read-out) with incredible accuracy. Result? Sharp, movement-free, perfectly exposed pictures every time... no matter how fast the action or how tough the shooting conditions.

Shoot with either hand! Konica's Left Hand Release Switch screws in easily, gives the Konica FS-1 optional handling capability. Makes tough shots simple. If you're left handed, the FS-1 is the only camera designed expressly for you.

Sequence shots, time lapse shots, incredible effects! Just set the new Konica Interval Timer anywhere from 2 seconds to 60 minutes, and your FS-1 will fire at the precise interval you set. It's a must for nature, scientific and technical photography. And only the Konica FS-1 system lets you use an interval timer without buying an accessory autowinder!

Even in sub-zero temperatures your Konica will perform flawlessly shot after shot with the new Konica Remote Battery Pack. Lets you keep batteries warm in your pocket supplying full power even when your camera may be freezing. Perfect for winter sports, mountaineering or any other cold weather applications.

The only 35mm camera with built-in autoload and autowind. Autoload: Simply place film in camera, close the back and the camera takes over. Autowind: Triumphantly engineered inside the camera. No bulky add-on.

Like all the Konicas, the fully automatic FS-1 is shutter priority. This superior system eliminates the perfectly exposed blur which is unavoidable with aperture priority cameras.

And all Konica SLRs have a full manual over-ride. Because we believe you should reserve the right to control your own destiny.

The Konica FS-1 is a lightweight, compact, shutter speed priority (SP) Through-The-Lens (TTL) automatic exposure (AE) Single lens reflex (SLR) camera. It is the world's first, highly sophisticated 35mm camera with auto film loading, autostart, autoadvance, autoexposure and autoflash systems. The Central Processing Unit (CPU) is the "brain" of the Konica FS-1 camera and has the largest capacity and most functions of any CPU used in a camera to date providing the user with a most versatile and highly reliable system.

Film counter: Positive type. Resets to start with opening of back cover.