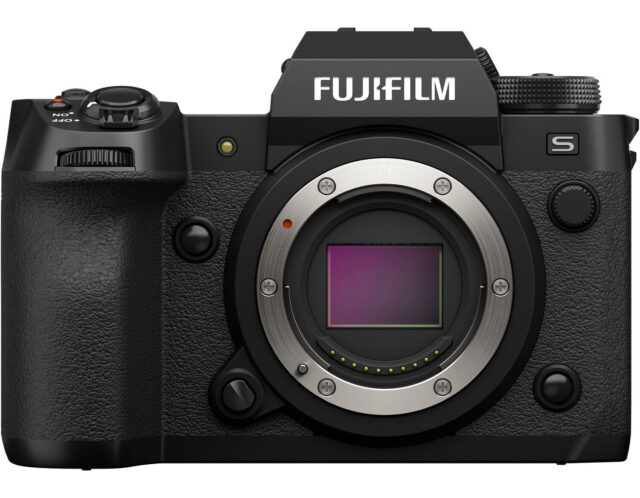 The X-H2S is a new flagship model boasting the highest performance in both stills and videos in the history of the X Series. This has been made possible by the use of the new back-illuminated, stacked, 26.16MP “X-Trans™ CMOS 5 HS” sensor capable of reading signals four times faster than the current device, and the high-speed “X-Processor 5” boasting double the image processing speed of the current device. The camera also features blackout-free burst shooting of up to 40 frames per second and high-performance AF system that uses AI to detect a subject. Furthermore, it can film 6.2K/30P and 4K/120P video and record high-definition footages. The highly-robust body packs other features including the five-axis in-body image stabilization that offers up to 7.0-stop advantage and extensive interface options including the dual card slot supporting a CFexpress™ Type B card, catering to the shooting needs of professional photographers.

In 2012, Fujifilm released the mirrorless digital camera “FUJIFILM X-Pro1” featuring an image sensor and an image processing engine developed in-house. Since then, the company has evolved these devices over the last decade in pursuit of advanced image quality and portability. The launch of the latest model “X-H2S,” featuring the newly-developed X-Trans™ CMOS 5 HS sensor and the X-Processor 5 image processing engine, heralds the arrival of the fifth generation of the X Series.

Main features of the X-H2S

At the time of a cold start in the operating environment at 25℃ (with the camera body starting at the temperature the same as or lower than the external atmospheric temperature). This is only possible when using the electronic shutter and in the JPEG mode. Note that the number of frames that can be recorded depends also on the remaining level of battery charge and the type / capacity of memory card used.

At the time of a cold start in the operating environment at 25℃, with the Auto Power Off set for “High,” Bitrate setting at 100Mbps, the vertical battery grip “VG-XH” attached and three batteries used. The recording time depends on the remaining level of battery charge and the type / capacity of memory card used. Note that the camera may automatically stop recording video when the body temperature rises beyond threshold.

Due to be released in September 2022

Items contained in the cover kit for protecting various terminals on the camera.