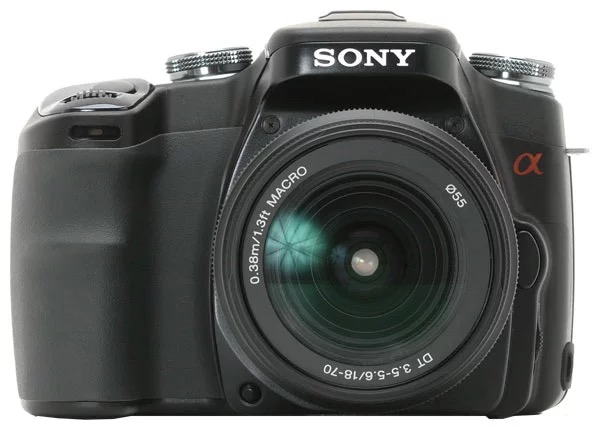 With its 10.2-megapixel APS CCD image sensor, the DSLR-A100 camera is expected to have the highest resolution available in its class. It will be introduced with 19 high-quality Sony lenses, and will be compatible with most of the former Konica-Minolta Maxxum® mount lenses. The system will include a wide range of accessories as well.

“Our system will be attractive to people who are ready for something beyond what’s available in D-SLR cameras today,” said James Neal, director of marketing for digital imaging products at Sony Electronics. “Sony enthusiasts who want to upgrade from point-and-shoot cameras, as well as former Konica-Minolta digital and film SLR camera users who have already made substantial investments in lenses, will welcome this initiative.”

Fight Blur With Your Camera, Not Your Lens

The DSLR-A100 camera is engineered to combat blurry pictures through high light sensitivity (up to ISO 1600) and Super SteadyShot® image stabilization, a Sony technology that shifts the image sensor to compensate for camera movement.

Because Super SteadyShot is built into the camera body, all compatible telephoto, wide-angle, standard and macro lenses are automatically image-stabilized. This also allows from two to 3-1/2 stops of latitude in exposure, which supports hand-held shooting at longer shutter speeds than would otherwise be possible. In the end, you have more opportunities to shoot in natural lighting without a tripod or a flash.

The α (Alpha) DSLR-A100 will be the only D-SLR camera that can optimize dynamic range, meaning the range from highlights to shadows, including gain and contrast, through in-camera hardware processing.

Sony’s Dynamic Range Optimizer (DRO) analyzes the captured image data and instantly determines the best exposure and color tonality of an image before JPEG compression. Unlike software optimization of a processed image, DRO is performed in the hardware. It is the first hardware-based DRO solution with the speed required for high-speed shooting.

Now You Can Really Catch The Action

The high-speed Bionz image processing engine allows you to capture pictures at lightning speed. The camera will offer high-speed burst shooting at up to three frames per second continuously, at 10.2-megapixels and the finest JPEG compression. For those action shots, you’re limited only by the speed of your media card.

The new camera will also have a long battery life. The supplied lithium ion battery gives you up to 750 shots per full charge, depending on usage patterns and environmental conditions.

Get Dust under Control

“For D-SLR camera users,” Neal said that, “dust is the enemy.”

Dust collects on the image sensor, usually when lenses are changed, and appears as annoying spots in photos, which then need to be retouched later. Sony’s new system offers a novel, two-pronged approach to fighting dust.

The camera’s CCD image sensor has an indium tin oxide coating to avoid static build-up so that dust does not readily adhere. Additionally, when you turn the camera on or off, an anti-dust feature is activated to literally shake off dust particles.

A Flexible System for Creative Possibilities

The system will also be supported with a full range of accessories, including a line-up of flashes, cable releases, rechargeable battery packs and several styles of carrying cases.

The α (Alpha) camera also features eye-start auto focus, which starts focusing your picture before you even press the shutter; a 2.5-inch Clear Photo LCD Plus™ screen for wide-angle viewing and exceptional color reproduction; JPEG and RAW file format support; and a comfortable camera grip with easily-accessible function and mode dials.