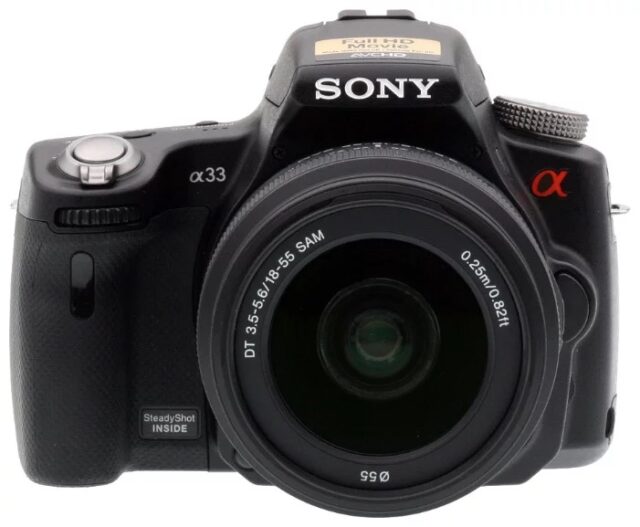 The α (pronounced Alpha) family of interchangeable lens cameras from Sony grows with the compact, ultra-responsive new α55 and α33.

High-resolution live image preview with rapid, accurate phase detection autofocus is thus available at all times – either via the angle-adjustable 7.5cm (3”) LCD or precision Tru-Finder (electronic viewfinder). This also ensures that even moving objects stay in sharp focus at all times, whether you’re shooting Full HD video or stills.

Translucent Mirror Technology overcomes other traditional limitations of DSLR models, with its simplified mechanical design shrinking camera size and complexity. This makes the α55 and α33 a compelling choice for casual photographers who want to capture spontaneous family moments and travel scenes with less to carry.

Full-resolution shooting at up to 10fps with precise AF tracking

There’s also a precision electronic viewfinder with 1.15 million dot resolution that delivers a clear, bright image with 100% frame coverage. Adjustments to exposure, depth of field and colour can be previewed instantly, either in the viewfinder or on the LCD. Effortless composition is aided further by switchable grid line in the finder and LCD screen, plus a new digital levelling gauge.

The α55 and α33 are compatible with the full range of over 30 A-mount interchangeable lenses and offer SteadyShot INSIDE. This in-body image stabilisation system provides up to 4 exposure steps of anti-shake correction when shooting handheld.

Both cameras also feature 3D Sweep Panorama, allowing photographers to capture detail-packed extra-wide panoramas with a huge field of view. 3D panoramas can be enjoyed on any compatible 3D HD television. The SLT-A55 is also the first α camera by Sony with integrated GPS, allowing automatic geo-tagging of images and video clips.

The new-generation Exmor™ APS HD CMOS Sensor inside both cameras supports a sophisticated range of digital image compositing and processing functions. This gives even greater artistic possibilities to beginners and photo enthusiasts alike.

The new α55 and α33 Single Lens Translucent mirror cameras by Sony are available from September 2010.