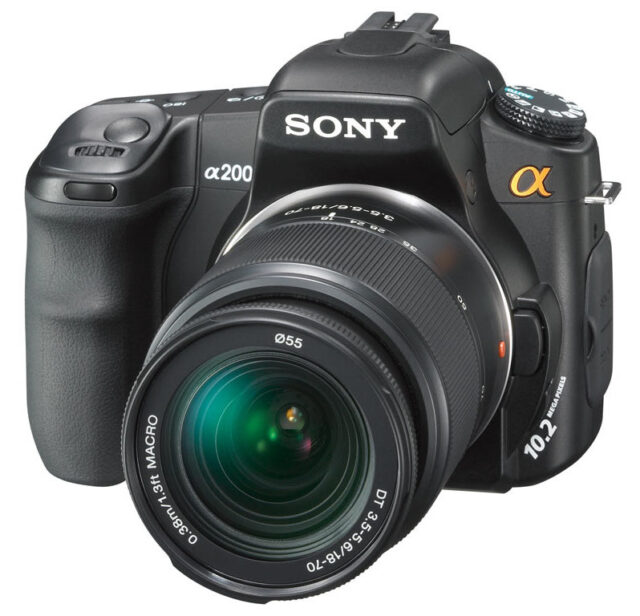 The DSLR-A200 model features upgrades influenced by the recently-introduced, enthusiast-class DSLR-A700 camera and replaces the former Sony DSLR-A100 model, which was Sony’s first in the DSLR class.

The new model is designed to be faster, lighter and easier to use. Upgraded features include a wider, 2.7-inch Clear Photo LCDTM screen for easy playback viewing; a more compact body and an easily-accessible mode dial; an easy-to-use function menu (camera function display); improved noise control for higher quality images; an auto focus speed 1.7x faster than the previous model; improved predictive control performance; quieter shutter sound; automatic pop-up flash; and a battery life indicator that displays the percentage of battery life remaining so you know exactly when to recharge.

As seen in all α (alpha) camera bodies, the DSLR-A200 camera incorporates Super SteadyShot® image stabilization in the body to allow shooting at shutter speeds of 2.5 to 3.5 steps slower than otherwise possible – a benefit realized with every compatible lens attached to the camera. Compatible lenses encompass all Minolta Maxxum® mount lenses, in addition to Sony α (alpha) lens lineup - including Carl Zeiss® lenses.

“With the DSLR-A200, we are helping consumers capture high-quality images with advanced technology that’s practical and easy to use,” said Phil Lubell, director of marketing for digital cameras at Sony Electronics. “This model is an ideal step-up for point-and-shoot users who are looking for a camera that can capture virtually all of the photographs they want.”

The DSLR-A200 model supports JPEG and RAW file format support. It has a slot for CompactFlash™ Type I/II media cards. An adaptor for Memory Stick Duo™ media cards is sold separately as an accessory.

Get The Photo Results You Want

In addition to Super SteadyShot image stabilization for virtually blur-free photos, the new model incorporates Sony’s D-Range Optimizer (DRO). It helps you capture well-exposed images, especially when shooting high-contrast or backlit scenes that often lead to loss of highlight and shadow detail. Sony’s DRO modifies the range from highlights to shadows, including gain and contrast, through its in-camera hardware processing to produce more natural, evenly exposed pictures. The camera’s image analysis technology studies the captured image data and instantly determines the best exposure and color tonality for the image before JPEG compression.

The BIONZ image processing engine powers the camera up immediately and the eye-start autofocus starts the focusing system before you even press the shutter. The camera can shoot up to three continuous frames per second at 10.2-megapixels at the finest JPEG compression level.

As seen in previous α (alpha) models, the new model carries a static-free anti-dust coating on the CCD filter which is gently vibrated to dislodge any dust that might have collected each time the camera is powered off.

The camera’s smaller, more compact body along with its wider, 2.7-inch Clear Photo LCD TM screen and a new on-screen navigation interface make it easier to carry and to use. The vibrant, easy-to-view screen features 230K-pixel resolution, an anti-reflection coating and glare-reducing layer assures vivid, accurate colors with a wide viewing angle, even in daylight. The on-screen navigation display shows camera settings and key shooting information in large, easy-to-read text. The display’s orientation automatically switches from landscape to portrait position when the camera is turned on its side.

Sony is providing a full line of accessories for the model, including flashes, rechargeable battery packs and several carrying cases. An interesting addition is the VG-B30AM ergonomic vertical grip equipped with the most essential controls for portrait orientation shooting. It also allows for the use of two InfoLITHIUM® batteries (sold separately) for up to 1,500 shots on a single, full charge.