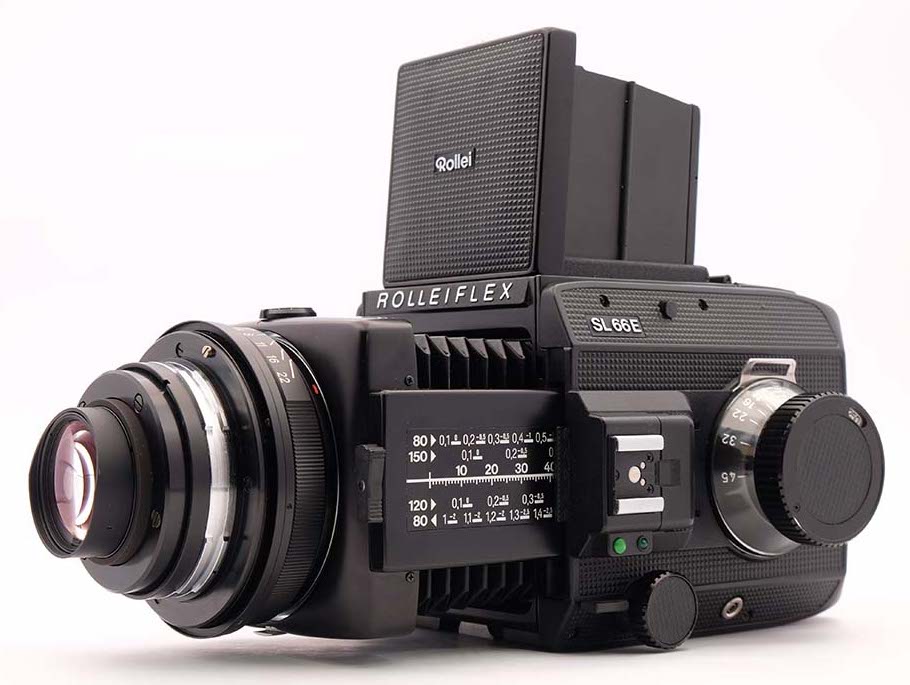 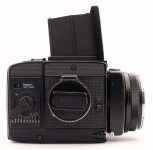 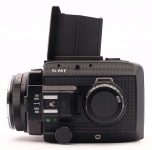 The SL66E is the world's first 2 1/4 x 2 1/4" SLR camera with built-in TTL (through the lens) flash and ambient metering designed for the professional.

Founded on the proven concept of the SL66, the SL66E maintains those same desired features and system flexibility while incorporating several new ones.

For close-up and macro photography, its built-in bellows and retro mounting capability of lenses without need of accessories, permits reproduction ratios of up to 1.5:1. In addition, the tilting lensboard of the SL66E provides for greater depth-of-field correction, even at wide apertures (Scheimpflug principle).

The standard magazine of the SL66E accepts either 120 or 220 film. Film speed selection is set on the magazine and automatically relayed to the metering system of the camera via an ASA setting dial. Built-in sensors automatically stop film advance at frame one and indicate the end of a roll by both an audible and visual signal.

Accessory magazines for the SL66E include a horizontal 6x4.5, and Polaroid back with darkslide. The SL66E features a mirror lock-up control as well as a pneumatic dampening system for vibration free shooting. Other necessary features include multiple exposure control, safety locks to prevent accidental exposure of film, user interchangeable focusing screens and a film/no film indicator.

A true system camera, the SL66E is supported by a complete line of high quality precision lenses and accessories. The lenses offer superior Zeiss optics and range from a 30mm Fisheye to a 1000mm super-telephoto.

In addition, all present SL66 accessories are useable with the SL66E, ideal for the present SL66 owner or those contemplating the purchase of one.

Shutter: Focal plane shutter, speeds from 1 to 1/1000 second and B. Time exposures are achieved by locking the shutter release when shutter is set to B.

Bellows: Extends 50mm and can be tilted 8 deg. up or down for increased depth of field. Focusing strut indicates bellows extension and reproduction ratios for 80, 150, 120 and 80mm reversed lenses.