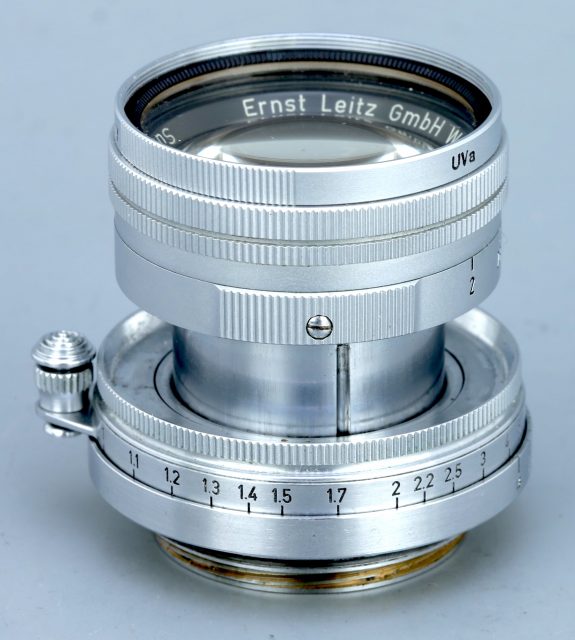 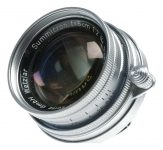 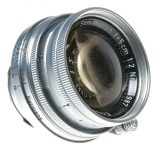 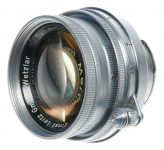 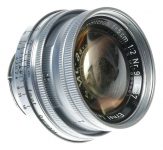 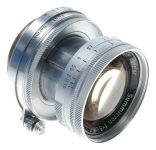 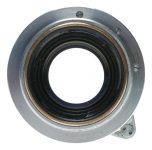 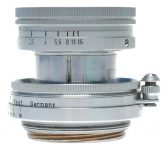 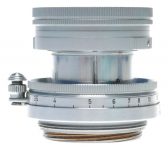 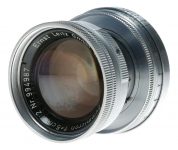 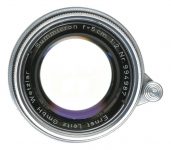 Here is a truly new advance in camera optics and design ... another Leica first. The Summicron 50mm f/ 2 is the only high speed lens that will give your pictures corner-to-corner sharpness. The Summicron is a seven glass element lens incorporating a radical new design principle and utilizing newly developed high refractive optical glasses combined with air lenses of a special shape and effect. This makes possible a degree of correction found in no other lens.

Your black and white pictures will take on a new sparkle with overall sharpness from center to edge. You will get truer rendition in your color transparencies, particularly at the edges. The Summicron lens will establish new standards of excellence in both color and black-and-white photography. See it NOW at your franchised Leica dealers'!

The Summicron is a new addition to the Leica line of lenses; new type of glass, new optical design and of excellent correction, especially for color, flatness of field and vignetting.

The Summicron is more compact than the Summitar and the diaphragm adjusting ring has click stops. All glass-to-air surfaces are coated.

A study of the schematic drawing will immediately reveal an unusual optical design. There are seven elements, only one pair of which is cemented. Utilization is made of "air lenses" to achieve an exceedingly high degree of correction. The basic design is a variation of the Gauss-type lens. (The Gauss-type is characterized by two converging lenses, one at each extremity of the system, enclosing two diverging meniscus lens components, located adjacent to the diaphragm.) This provides a favorable basis for color correction.

The Summicron has been further corrected to reduce the extra axial spherical aberration and loss of contrast at the edges to the absolute minimum, while at the same time obtaining a perfect correction of the astigmatic curvature of field, and reaching an optimum performance chromatically. Important in achieving this high degree of correction is a new optical glass of high refractive index used for the two positive elements of the system.

The Summicron performs excellently at full aperture producing an exceedingly brilliant and even image over the entire field. Optimum image quality, which normally cannot be attained until the lens is stopped down considerably, is reached in the Summicron at the relatively large opening of f/4. An extremely high degree of contrast and resolution is obtained.

Correction of vignetting in a large aperture lens is of great importance. Unless special attention is paid to this, the edges of the negative will receive much less light than other areas, resulting in a darkening of the edges of the picture, or in the case of color photography, a false rendition of color at the edges of the transparency. The front element of the Summicron is larger in diameter than required for a relative aperture of f/2. This design increases the transverse section of the bundle of oblique rays, permitting more light to reach the edges, thereby reducing vignetting to a minimum.

Increasing the width of the oblique bundle of rays to eliminate vignetting increases the difficulty of correcting other aberrations. The reduction of vignetting in the Summicron, coupled with its over-all high correction, can be regarded as an outstanding achievement of optical design. The Summicron is a lens of highest performance leaving nothing to be desired for either color or black-and-white photography.

Clearly derived from the Summitar 50mm F/2, but with a superior performance due to the new types of glasses, some of which were developed by Leitz.

The number of aperture blades could be 10 or 16.

Copyright © 2012-2021 Evgenii Artemov. All rights reserved. Translation and/or reproduction of website materials in any form, including the Internet, is prohibited without the express written permission of the website owner.

One of the best fast standard primes

Leica lenses are one-of-a-kind optical masterpieces that are impressive because of their unique Leica Look. This is ensured through exceptional optical design combined with selected materials and the highest quality standards.

Leica lenses reveal their full potential only when mounted on Leica cameras, since only these have sensors precisely matched to their optical characteristics.

Lens mounts of competing manufacturers (Canon, Nikon, Pentax, Sony etc.) are always incompatible. In addition to the mechanical and electrical interface variations, the flange focal distance from the lens mount to the film or sensor can also be different.

The flange focal distance (FFD), sometimes called the "flange back", is the distance from the mechanical rear end surface of the lens mount to the focal plane.

The convex front element protrudes from the lens barrel, making it impossible to use filters.