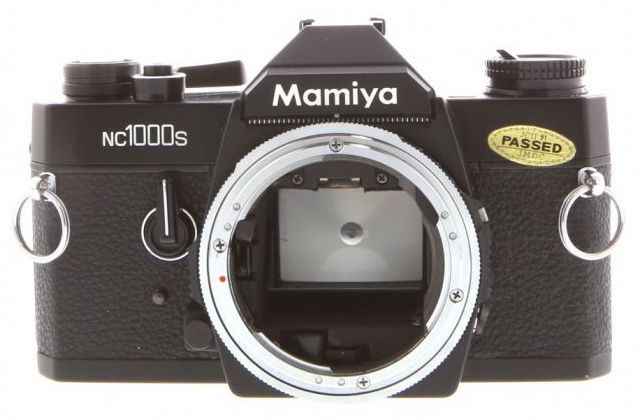 The Mamiya NC 1000S is an innovative 35mm bayonet-mount automatic SLR camera which has been developed with Mamiya's superior technology and long experience as a leading manufacturer of professional medium-format cameras.

This new camera offers the ultimate in handling ease because of its compact size and light weight. Moreover, the open-aperture metering system assures that the large, brilliant viewfinder always remains bright, and the exposure automation system is of the popular shutter-speed priority type, in which the camera meter automatically selects the correct aperture in accordance with the shutter speed selected by the user.

The NC 1000S is designed to meet the needs of the amateur and professional photographers alike. To further enhance its remarkable capabilities, a wide range of accessories are available including an adaptor which allows stop-down metering and diaphragm automation with the TL, DTL, SX series and other universal thread (42mm) mount lenses.

Self-Timer: Variable time delay of approximately 4-9 sec.; has its own Activating Button and can be by-passed.

Viewfinder: Large, brilliant pentaprism SLR viewing. Exposure Meter Indicator Needle, Aperure Scale, and Stop-Down Metering Index Mark visible in viewfinder. Magnification of 0.94X with 50mm lens at infinity. Three-way focusing: Central rangefinder widge at 45 deg. angle surrounded by a microprism collar which is located in a matte field, with finely-grooved Fresnel lens for even illumination. The focusing screen of the NC 1000S is interchangeable with four other screens.