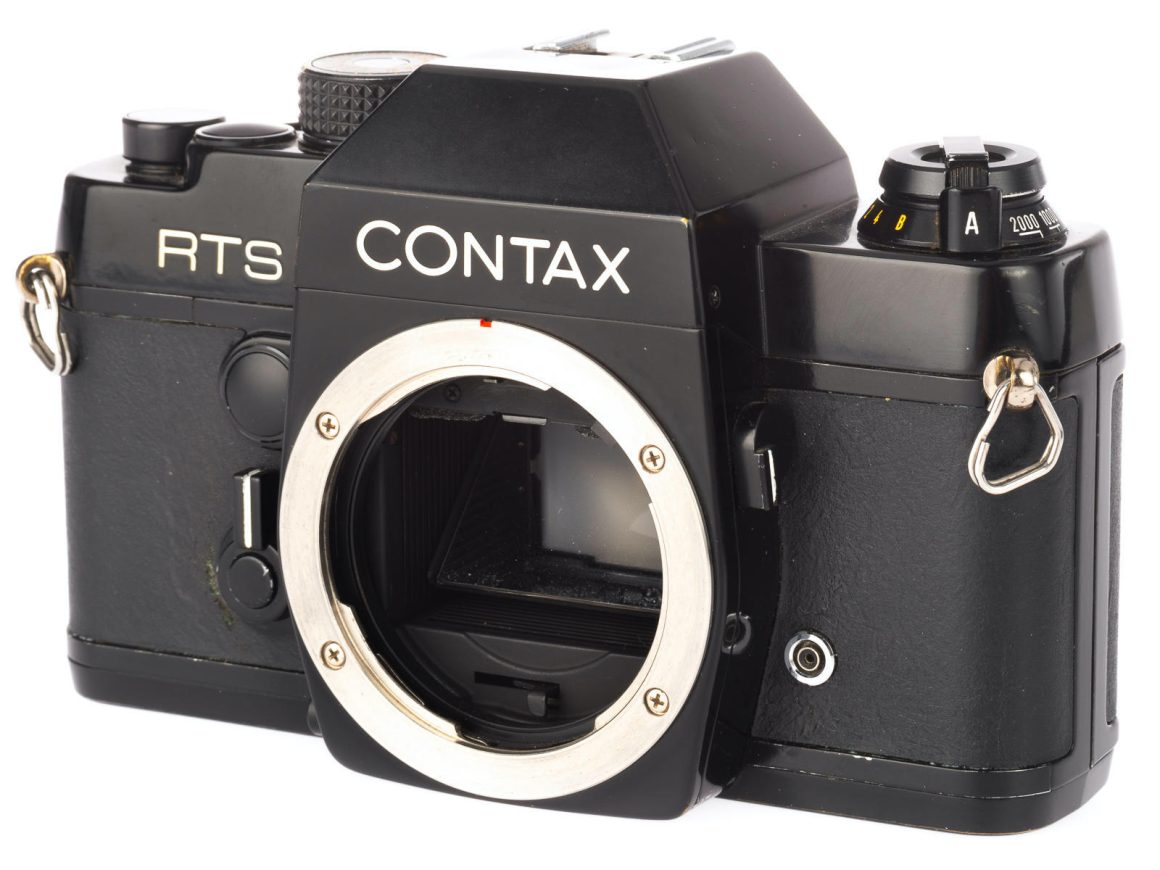 Shutter: Electronic focal plane shutterof a unique design (primary and secondary shutter curtains uncap to provide starting from the identical position) • Electronic timing on both Auto and Manual • Shutter speeds continuously variable from LT (4 sec.) to 1/2000 sec. on Auto; 14 clickstop settings from 4 to 1/2000 sec. and B on Manual • X sync terminal

Viewfinder Display: 16-dot LED shutter speed display shows calibrated and in-between speeds • Green shutter speed pointer overlaps "A" setting on Auto and indicates shutter control dial setting on manual • Aperture display shows maximum aperture of the lens in use on the extreme right and f-stop in use in green figure • Exposure compensation tab appears when the exposure compensation pointer is set at any position other than "X1"

Camera back: Back cover opens when the film rewind knob is pulled all the way out • Camera back interchangeable with Data Back or 250 Film Back (for use with motor drive unit)

The CONTAX RTS is a highly advanced electronic SLR system camera developed by mutual cooperation of Carl Zeiss, West Germany, and Yashica, Japan. It offers the advantage of the most sophisticated fully automatic through-the-lens exposure control. Designed under the theme of "Real Time" functional response and disposition of information, it provides such capability in alI fields of photography as could not possibility be expected of other 35mm SLR models. The New Bayonet Mount also a product of mutual cooperation between Carl Zeiss and Yashica - affords perfect coordination of the optical, mechanical and electronic systems. The exclusive "Real Time" features are:

By pressing the LED display button before or after film wind, the LED (light emitting diode) in the viewfinder will come on instantly to display the calibrated or in-between shutter speed ensuring correct exposure in relation with the preselected aperture.

Because this magnetic release trips the shutter through feather-touch fingertip action, camera shake at the critical moment of exposure is effectively prevented. Since, moreover, shutter tripping is accomplished through contact of an electric switch, all types of off-hand controls can be used directly. Correct exposure is obtained through "Real Time" light reading immediately before exposure.

Because your CONTAX RTS features an electronic focal plane shutter with a unique design under which the primary and secondary curtains uncap to provide starting from the same position, precise shutter speeds can be obtained up to the maximum of 1/2000 sec.

Because the magnetic release functions strictly on electrical principle, various types of electrically operated off-hand controls can be used directly by merely plugging into the camera's release socket. The off-hand controls currently available include the Infrared Controller Set and Interval Timer.

The magnetic release does greatly more than just tripping the shutter. In the final stage of its function, it switches on the motor drive switch to provide precise synchronization with the motor drive unit. Of the two types of motor drive units, the Real Time Winder is a compact unit which can be regarded as standard equipment of your CONTAX RTS.