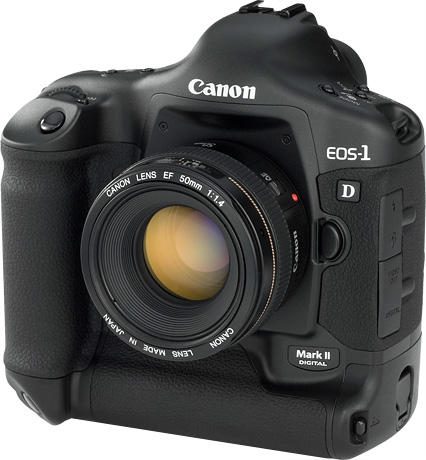 In response to requests from professional users, Canon has included a range of new features in the EOS-1D Mark II, including a greater choice of image-quality settings, with four JPEG sizes and ten compression levels in addition to RAW files. Additionally, two customizable color-matrix settings, in addition to five preset modes, enable image optimization according to the requirements of the subject or output device. Moreover, dedicated card slots for CompactFlash and SD memory cards enable simultaneous backup or selective recording to either card, while a video output terminal enables users to view images on a television screen. The model also incorporates a two-inch 230,000-dots LCD monitor which, doubling the resolution of the previous model’s, enables magnification up to 10x to effectively check image focus during playback.

The latest and most advanced addition to Canon’s range of professional digital SLRs, the EOS-1D Mark II inherits the renowned functions and usability of the EOS-1D and EOS-1Ds. These include the company’s proprietary 45-point area autofocus, which makes photo composition quick and easy by eliminating the need to position the subject at the center of the picture; a 21-Zone Evaluative metering sensor to ensure ideal exposure performance; an advanced full-frame viewfinder; and Custom Function control, which allows users to tailor camera operations to their individual preferences. Further catering to the needs of pro users, the new camera ships with a software suite that includes Canon’s newly developed high-speed RAW-image-processing application, Digital Photo Professional. The newly developed application incorporates input from professional users, including high-speed image previews, a multi-frame editing window and batch processing, to boost workflow efficiency when working with large quantities of RAW images. Also included among the bundled software is the all-purpose EOS Viewer Utility which, based on Canon’s previous File Viewer Utility, features such improvements as high-speed RAW-image previews and a refined user-interface for enhanced operability.