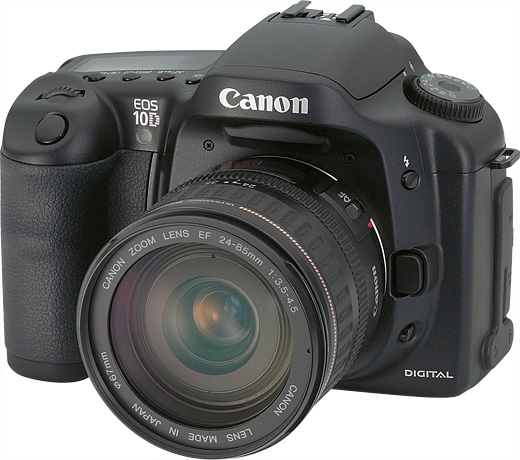 Amstelveen, The Netherlands, 2003 - Canon, the leader in photographic and imaging technology, introduces the EOS 10D, a 6.3 million pixel Canon digital SLR with a seven point wide area autofocus system, and fast three frames per second burst rate and an ergonomic super-tough magnesium alloy body shell. Launched as the successor to the award winning EOS D60, the EOS 10D builds on the strengths of this highly popular model with a range of improvements to both the camera's design and to its specification.

"The EOS 10D is a camera with massive appeal for serious amateur photographers and professionals alike," says Hiroshi Komatsuzaki, Head of Canon Consumer Imaging Europe. "Its new magnesium alloy body makes it a much more durable and rugged camera, while the improvements in focusing speed and tracking put the EOS 10D on a par with our high-end EOS film cameras."

The 6.3 million effective pixel CMOS sensor used in the Canon EOS 10D is supported by Canon's unique high power DIGital Imaging Core (DIGIC) processor. The speed at which the DIGIC processor works has allowed Canon to extend the number of full resolution images in burst sequences to 9, at a rate of 3 frames per second. As well as improved speed, DIGIC also helps produce more accurate colour rendition while reducing image noise.

Adaptable to all shooting conditions

The EOS 10D is able to save images simultaneously in both RAW and JPEG formats. With the option of six JPEG file sizes you have control over how large the accompanying JPEG file needs to be. A break through in Canon's noise control technologies sees the EOS 10D offering a wider set of ISO equivalents. A range covering ISO 100-1600 offers high quality images across a very broad spectrum of shooting conditions. Photographers working in particularly poor light may also take advantage of an option to extend this range to ISO 3200, via the custom function menu.

The metering system on the EOS 10D has improved exposure consistency and stability; it uses the newest metering algorithm available and a 35 zone evaluative metering system linked to all 7-focus points.

For a greater selection of recordable colours, and greater image flexibility, Canon has included the Adobe RGB colour space standard into the EOS 10D while maintaining the sRGB format. Photographers can now select a colour space to suit the job in hand.

Printing and cropping on the road

The EOS 10D is the first digital SLR camera to feature Direct Printing. Linking via a USB cable, photographers will be able to see prints immediately from any of Canons range of compatible Bubble Jet or CP printers without the need to connect to a computer. Controls within the camera's own menu system allow users to choose print quantity, size and image cropping. When using Canon's Card Photo Printer CP-100 15x10cm printer, with the optional battery pack, prints can be made in the field away from a mains power supply.

Feature laden: Other significant features of the EOS-10D include:

The EOS 10D digital SLR camera inherits and expands on the advanced features of the EOS D60, offering enhanced digital-performance and improved shooting features to meet the needs of high-end amateur users.

The new camera offers enhanced continuous-shooting performance, capturing approximately three frames per second for a burst of up to nine shots, regardless of the recording format, ISO setting or subject conditions. Canon has achieved new advances in its CMOS sensor technology to make possible longer exposures with less degradation in image quality for an extended range of ISO-equivalent speed settings from ISO 100 to ISO 1600. Moreover, the new camera offers an “ISO Expansion” menu setting that permits users to select a maximum speed of ISO 3200.